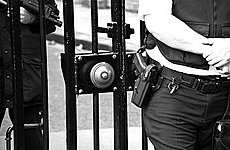 LONDON police officers are to carry Taser guns as a matter of course and wield battlefield assault rifles for tougher assignments.

Already, forty Metropolitan Police officers in five London boroughs – Barking and Dagenham, Bromley, Enfield, Havering and Kingston – have been issued with Tasers, the first part of a scheme to fit every patrol car in town with the powerful electric-shock weapons.

“This is about making sure that our officers are best equipped in their duty to protect the public,” said Met Chief Inspector Darren Murphy.

Until recently, Tasers were used only sparingly by the Met, but even then, they have have been the subject of controversy and serious misuse, as when one innocent north London man was assaulted by police with a 50,000 volt stun gun, or when an 82-year-old man from Ealing was hospitalised after being Tasered.

“This could lead to potentially lethal mistakes and no-one wants that.”

Meanwhile, police chiefs are to issue armed squads with battlefield-category assault rifles, the same weapons as used by the British army, partly in a bid to save costs.

“We need to identify new equipment; joining the MoD is a way of reducing the cost of an expensive process,” said Chief Superintendent Alistair Sutherland of the Met’s CO19 firearms section – the unit involved in the slaying of innocent terrorist-suspect Jean Charles de Menezes.

London Eye’s Pods to Get TVs and Go Low Carbon