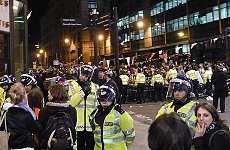 THE METROPOLITAN Police broke the law when they kettled protesters at the 2009 G20 demo, the High Court ruled today.

In a ruling that could signal big changes to the way demonstrations are policed in the future, a panel of judges ruled in favour of two protesters, Hannah McClure and Josh Moos, and against the Met.

Lawyers argued that McClure and Moos had been unfairly detained during the kettling operation, in which thousands of people were stopped for several hours from leaving a ‘Climate Camp’ on Bishopsgate.

The High Court ruled that there was “no reasonable” justification for “kettling”. The court’s ruling appears to have been decided on the basis of the non-violent nature of the Climate Camp.

On the day of the demo, 1 April 2009, officers punched and used shield strikes on peaceful protesters who chanted “this is not a riot” as they held up their hands in submission, the court was told and shown through video evidence.

It was at an associated G20 demo that innocent bystander Ian Tomlinson died following attacks by a police officer.

Although the ruling could limit use of the infamous kettling tactic, it appears to leave open the possibility that police can kettle people if they believe they have evidence that protesters are intent on violence.

London Olympics Were a Quarter Greener than Predicted