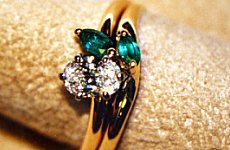 THE MEN who made off with £40M from a Mayfair jewellers – the biggest gem theft in British history – have likely fled overseas, according to high-end crime experts.

“The people who carried out the raid are likely to have dispersed and gone abroad,” said Atonia Kimbell, of the Art Loss Register’s recovery unit.

The stolen booty, from Graff Diamonds of New Bond Street, is also already to be out of the country, Kimbell told The Telegraph.

The robbery took place last Thursday afternoon. The two smartly dressed men tricked their way into Graff’s, forced shop staff to lie down at gunpoint and stole 43 items including a platinum white Marquise diamond ring, something like the one in the photo.

After briefly taking a woman shop worker hostage – probably to ease their exit – the duo then fired a warning shot into the ground and made good their escape via a succession of getaway cars.

The heist came to light yesterday when police issued an appeal for help and made public a video of the incident.

“I would urge anyone who recognises them, knows the whereabouts of the jewellery or has any other information to contact us.”

Kew Gardens Opens Up to the Thames