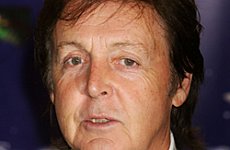 The former Beatle has shunned traditional holiday destinations in favour of driving along America’s legendary Route 66 in a classic 1989 Ford Bronco.

The couple left Paul’s New York home last Thursday (30.07.08) and are expected to stay together for all of August – their longest time together since they were first linked last November.

News of the trip emerged after Paul posed for pictures with a group of fans at a service station in Springfield, Illinois, on Saturday (01.08.08) after travelling almost 1,000 miles since setting out.

One fan, CJ Lowder, said: “They looked totally in love.
“Nancy jumped at the chance to take a picture of Paul with us.

“They told us they were on a rip and going to St. Louis before heading west. No one could believe it was really him – he was so laidback and ordinary.

“They seemed a great couple.”

The trip has been planned in great secrecy, with Paul, 66, and Nancy, 47, telling just a few friends.

A source close to Nancy said: “The road trip was Nancy’s idea as a way of them getting to bond and spend time together – just the two of them.

“They’ve been talking about the holiday non-stop and were so excited.

“It’s the perfect way for them to both get away from it all and really get to know each other. Paul even packed his guitar.”

According to reports, the car they are travelling in is the vehicle they were first spotted kissing in late last year.

London gets wired up as O2 joins rivals Underground and black...

Madonna: Our Sex Life is Amazing