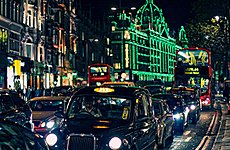 LONDON clears its collective desk today, the last main work day before Christmas, which is nearly always the busiest for road traffic in Britain.

This year promises to be no exception with the AA predicting 18 million cars on the roads in the next 24 hours, compared to 10 million on a normal traffic day.

“There will be a delayed rush hour today,” said an AA spokesperson.

“Rush hour won’t start until 10am as people either go off to spend Christmas away from home or do Christmas shopping, so there will be a mixture of people travelling long and short distances.”

“People should allow extra time for their journeys and they should make sure their cars are well-prepared.”

Wise words. Traffic is likely to be heaviest, say the experts, on the usual-suspect routes, such as the M1 and M4 on the way out of London, the M25 and the M4 and M5 way out west.

It might not help if you’re stuck in a jam, but the Highways Agency says that 500 road works will be completed by Christmas and 60 more will be suspended until the new year.

No major delays have so far been reported for the several millions going by air this weekend – good news for Santa Claus – but some of the estimated 20 million people using trains will see their journeys hit by engineering works.

On the bright side, the weather is expected to be unseasonably warm, with London lucky enough to see the sun and the whole country likely to enjoy winter temperatures of up to 13c.

Whatever your travel plans, have a safe and cheerful Christmas, with love and peace from all at LondonNet.