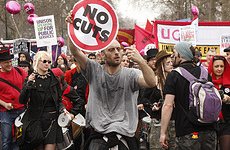 LONDON is to get its own version of the Occupy Wall Street camp this weekend when thousands are due in The City for an Occupy London Stock Exchange, or Occupy LSX, event.

What started last month as a stake out against austerity measures and tax-guzzling bankers based in New York’s financial district has quickly spread to cities across the world and has given new life to campaigners in Britain’s own anti-austerity movement, such as UK Uncut.

“The rapid growth of the Wall Street occupation has shown that this is what is needed in London and the UK,” said UK Uncut backer Peter Hodgson.

“The government is ignoring its electorate as they impose these austerity measures.”

Saturday’s Occupy LSX protest is to centre on Paternoster Square, near the UK HQs of iconic financial institutions including Bank of America and Goldman Sachs. Participants are asked to assemble in front of St Paul’s Cathedral at 12 noon tomorrow, Saturday 15 October.

“The Wall Street protests sort of inspired everything,” said Kai Wargalla, one of the organisers of Saturday’s protest.

“It was just time to start here. We need people to step up and speak out. The movement aims to unite the United Kingdom’s far-flung activist communities in addressing ‘the inequality of the financial system.”

Southwark is the Creative Heart of London, Says Report