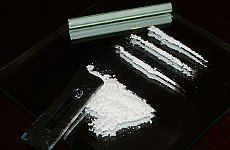 LONDON sends more people to cocaine rehab than anywhere else in England, according to a new report put out by the government’s National Treatment Agency for Substance Abuse.

“There is considerable regional and local variability in the demand for cocaine treatment,” says the report.

“The highest prevalence is seen in London.”

Within the capital, suburbia appears to be where the white stuff lives. Havering won the Coke Cup for the year under scrutiny – 2008/9 – with Bexley, Bromley and Greenwich all in the top slots for people in cocaine treatment.

Taken together, the two groups of young people made up nearly half of all those in cocaine rehab across England.

The good news is that the treatment works.

“Over 71% of powder cocaine users who come into treatment stop using or reduce their use substantially within six months,” says the report.

Coincidentally, London’s position at the top of the cocaine treatment table comes the day after it was labelled the capital of rage.

London is Rubbish at Rubbish