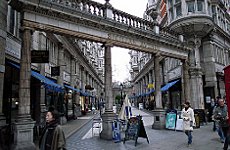 BLOOMSBURY, Holborn and St Giles are set to be grouped together under the title ‘Midtown’ in a bid to raise the profile of an area sometimes seen as the boring bit in the middle of the West End and The City.

“It is so central and yet so ignored,” said Tass Mavrogordato, CEO of InHolborn, a group campaigning for investment in the zone, which has now been handed the backing of London Mayor Boris Johnson.

“The problem is that New Oxford Street is just so horrible, there is no major retail street and it serves mainly as a transport corridor.”

The way to get around those snags, according to InHolborn, is for the many business based in the area to chip in to a central pot, worth many millions of pounds, from which funds would be used to spruce things up and forge that elusive sense of identity.

Already, there are free, guided, lunchtime walking tours and distinctive orange-clad Rangers who patrol the area offering advice and passing on relevant info to the police.

All well and good, but what’s with the name ‘Midtown’? Giving old areas new names is a well known estate agents game, but some might balk at such an obvious copy of the famous New York area. It didn’t work when they tried to call Fitzrovia ‘NoHo’, anyway.

However, it isn’t written in stone yet and Mavrogordato says they plan to have a public vote on a new area name, from a list of alternatives. Given Boris’ involvement, one possibility has got to be St Bloo-hole.

Before that, in February, local businesses get a vote on whether to stump up the cash for InHolborn’s ambitions.

Rolling Stones Play 50 Songs in Five Days Ahead of New...