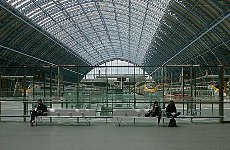 LONDON-PARIS in two hours is coming down the track with the announcement today that Eurostar is to buy a new, faster train fleet.

Eurostar trains of the future will hurtle along at 200mph (320kph), 10mph faster than today’s engines.

That increase in speed is enough to knock nearly 15 minutes off the two and a quarter hours current travel time between the British and French capitals, itself at least twenty minutes faster than when Channel Tunnel trains first completed the same route some 16 years ago.

The 10 new e320 trains, built by German company Siemens, will be able to hold 900 passengers each, 150 more than the existing trains.

As well as improvements to the London-Paris route, Eurostar also plan to use their new £700M fleet to expand their operations and cut travel times further afield.

“Over the last 16 years Eurostar has revolutionised travel between London, Paris and Brussels but our sights are now set on expanding our business across Europe,” said Nicolas Petrovi, Eurostar CEO.

To do that, the new trains will be what the jargon calls “interoperable”, which means they can be used on different tracks throughout the European rail network.

Once the new trains are in service, the London-Amsterdam journey will be about four hours and London-Geneva five, times that experts say Eurostar have been forced to aim for as the company is soon to face competition from Deutsche Bahn, which also has plans to slash journey times between London and Europe.