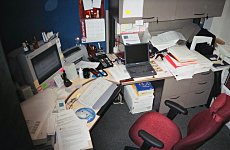 FEELING the pinch as this month’s salary ekes away? Console or provoke yourself that you might well be counting the pennies in the most expensive space on planet earth.

Once again, London’s office rents have been ranked the priciest in the world, grabbing two out of the top three places in a league table compiled by CB Richard Ellis Group Inc., the world’s leading international commercial property company.

The West End and The City came in at first and third in the survey, separated by Mumbai. Average annual rents in the West End are, according to CB Richard Ellis, USD328.91 per square foot. That works out as about UKP6,000 a year for the space your desk and little old you take up.

Average annual rents in The City are USD180.80, which comes in at around UKP3,800 a year for your work zone. The obvious solution to money worries, then, is to swap your PC for a PDA, sawer your desk in half and pull your elbows in before demanding a pay rise.

Alex Reid Bans Ejaculation and Says Sex is Like Going to...