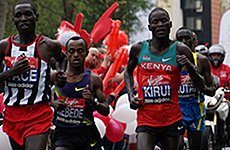 SUNDAY’S London Marathon could be as much about those missing from the race as those taking part, given the absence of Paula Ratcliffe, Katie Price and Buster Martin.

Ratcliffe, who has set her sights on marathon glory at the 2012 Olympics, has recently had a baby; Price suffered a cruel late injury after months of training and Martin, the Londoner who became the oldest runner of a marathon in the 2008 race, died yesterday aged 104.

But once Sunday comes around, it will still be all about the people wearing out the soles of their shoes, not least last year’s winner Tsegaye Kebede, who reckons he has a good shot at claiming the world record this year.

“If the body is healthy, and the weather good, I think on Sunday I will run the world record.”

The forecast is for good weather, so watch out for Kebede’s crack at countryman Haile Gebrselassie’s world mark of two hours three minutes 59 seconds.

Kebede will join some 35,000 other brave souls in taking on the 26 mile 385 yard (42.195 km) course from Greenwich to The Mall via some of London’s most eye-catching landmarks, with crowds well into the hundreds of thousands lining the route.

The marathon is famous for combining amateur runners like the inspirational Martin; competitive champions out to be first to arrive at the finish line and daft people shuffling along in fancy dress costumes.

“The essence of the London Marathon is the way it combines elite fields and the community runner, the fund-raiser and the person who simply wants to complete the race, because it is something they have to do,” said London Olympics 2012 chief Lord Coe.