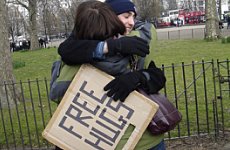 LONDON is now the cuddle capital of the world after 122 brave souls broke the world record for a group hug at St Pancras station this morning.

“People were a little bit nervous, but at the last minute everyone sprung into action,” said a spokesperson for drinks-cum-records company Guinness.

Some might argue that rush hour Tube trains break that 122 mark with ease every day, though the close bodily contact is mostly involuntary.

Anyway, mass cuddling is only one of the whacky events going on as the world celebrates the fifth annual Guinness World Record Day.

Here in London, Battersea Park is the venue for an attempt to pull a bus by the power of hair and hair was the theme in Florida, too, where Asha Mandela was confirmed as the owner of the world’s longest dreadlocks – measuring some 19 feet, 6.5 inches.

Last year, Guinness say that 300,000 people world wide were involved in record attempts and at least as many are expected to take part this year.

Diwali to Light Up Trafalgar Square