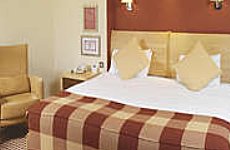 HOTEL room rates in London have crashed in the last year, with more price cuts likely over the coming months, report industry experts.

Numbercrunchers at PricewaterhouseCoopers suggest that, since the beginning of 2009, average room rates have fallen by 8./1%, or about £10 a room.

But even that big fall might be undercooking things, as a survey by Hotels.com has London hotel prices crashing by 12% in just the first six months of 2009.

Either way, it’s bad news for hotels’ bottom line and good news for people who fancy a sleep-over in London, a see-saw effect that’s reflected in the shift in the balance between tourist and business hotel visits.

Thanks to the price decreases and the fall in the pound, tourist numbers have gone up over the last period, but there haven’t been enough holidaymakers to compensate for the drastic decline in business traffic.

With the recession still biting, that process is set to continue.

“While room rate declines will slow, economic and travel fundamentals remain weak; the evidence points to more savage trading at the end of the year,” said Robert Milburn of PricewaterhouseCoopers.

* London is to get a new 100-room hotel, just off Regent Street. The boutique-style hotel will be developed by the Firmdale company, which currently runs six London hotels, including the Knightsbridge Hotel and Number 16 in Kensington.

Big choice of London hotels with cheap deals at our hotel section.