LondonNet
MENUMENU
Home London News London Commuting Times Are Down for Men, but Up for Women 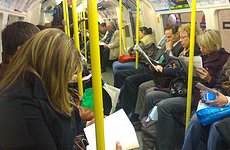 LONDON commuting times have fallen by over 2% in the past six years, a new survey has found, but that’s just for men – women’s travel times have risen by 3%.

On the average, London men now spend 77.2 minutes in total on the daily commute to and from work, down from 79 minutes in 2006. Women, on the other hand, have seen average commute times rise from 69.8 minutes a day to 72.8.

Both are still way ahead of the national average commmute, which stands at 52.8 minutes.

The explanation for the unlikely drop in men’s commuting times in London is the recession, as many more men have taken part-time jobs, which tend to be more local to the home area, where once they would have been in full-time work in the city centre.

“Recent trends suggest there is a link between long commute times and longer hours in the office, with the growing number of men in part-time work having shorter journeys to work,” said Brendan Barber, Secretary General of the TUC, which collated the survey.

The TUC’s report forms part of Commute Smart Week 2012, an initiative that encourages flexible working to avoid the stress of commuting.