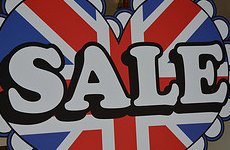 LONDON is the cheapest city in western Europe to buy branded stuff, but for the real world-beating bargains you need to head for Mumbai.

Those are two of the findings of an international price comparison survey conducted by PriceRunner.co.uk, who also found that Sydney was the world’s priciest place for famous brand name products from the likes of Apple, Converse, McDonalds and Swatch, and that Europe’s cheapest city was Warsaw.

Overall, London moved from sixth cheapest western European city in 2011, to fifth cheapest this year, despite the pound going up against the euro. For instance, a pair of classic Converse boots costs £44.99 in London compared with £76.99 in Oslo, £55.42 in Berlin or £55.48 in Paris.

“It’s great to see that London is still one of Europe’s cheapest cities for shopping,” said Andrew Walker of PriceRunner.co.uk.

“With Christmas just around the corner, it’s reassuring to know that some of the best deals are actually here in the UK.”