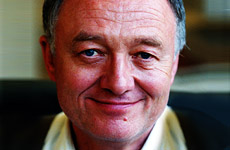 KEN LIVINGSTONE is out to get London businesses to join him on a mission to turn our city green.

So far, the London Mayor has persuaded some big names such as IKEA, Marks & Spencer, Tesco and Chelsea FC to join what Livingstone calls Green500, an initiative that he hopes will help reduce London’s carbon emissions by 60 per cent by 2025.

“The London green organisations programme will motivate, support and reward organisations to reduce their carbon footprint,” Livingstone said. “This is a world first, and places London at the forefront of government and business working together to cut carbon emissions.”

Companies which join Green500 will be assessed and then handed a deatiled plan on how they can cut their emissions, with their efforts thrown open to public scrutiny.

Businesses pump out a third of London’s carbon, with homes and other forms of property making up most of the rest. Livingstone has also recently announced green plans for those areas.