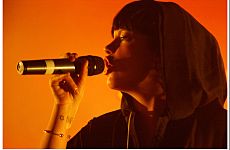 Lily Allen is reportedly pregnant with her first child.

The Smile singer, who is dating Chemical Brothers star Ed Simons, discovered she was expecting last month but has only just informed her close family of the happy news.

A source said: “Lily is thrilled to be pregnant and can’t wait to become a mum. She’s a real family person. Ed’s very happy. He is really looking after her.”

Lily, 22, began dating Ed, who is 15 years her senior, in September and sources insist they are excited about their impending arrival.

One said: “They could not be happier.

“It’s the icing on the cake for Lily as she’s had an incredible 18 months. She is looking forward to finishing her new album early next year and releasing it before the birth of her first child.”

Lily recently revealed she has a heart murmur, which is the reason behind her astonishing weight loss in recent months.

She said: “I found out I had a heart murmur about three months ago during a routine check-up. It was really scary.”

She has also curbed her former partying ways for health reasons. She said: “I was going pretty crazy back in the summer, drinking too much and partying loads. But this heart thing has made me cut back.

“I should also give up smoking, but I haven’t quite managed that yet.”