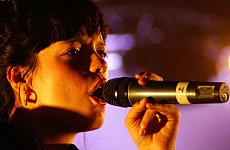 LILY ALLEN has been taken in for questioning by police, following her involvement in a snowball fight that went mad.

“The police came around to speak to me and I gave them a statement,” said the The Fear singer. “I simply told them exactly what I saw, and explained what happened.”

According to Allen, she was enjoying a friendly snowball mash-up on Primrose Hill when she spotted younger children in danger.

“We were having a brilliant day but then it all went a bit crazy and I was trying to look after these little kids who were getting caught up in it all,” she reports.

In the chaos, a man ended up badly beaten, hence the entry of the Met, who say they have arrested six youths in connection with the incident.

Allen’s travails aren’t the only downside of the snow attack: apart from all the inconvenience, economists calculate that around £1.2B has been lost over the last couple of days due to the number of people unable to work.

By today, the big majority of schools, workplaces and transport routes had resumed normal service, but weather experts say there is a chance of another snowfall this evening.

Meanwhile, Allen’s new single, The Fear, hit the top of the UK charts, ahead of her UK tour, which starts next month. You can get tickets for that right here.