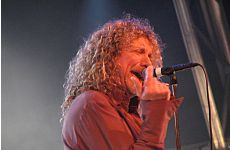 LED ZEPPELIN are set to appear at Wembley next year after their triumphant return to live performance at the 02 last night.

Though yet to be confirmed any of the band’s members, it is understood that two dates have been set aside for the legendary heavy rock group, probably during the summer of 2008.

At the 02, singer Robert Plant, 59 (pictured), guitarist Jimmy Page, 63, bassist John Paul Jones, 61, and 41-year-old drummer Jason Bonham – blew the roof off with their trademark ear-splitting sound. The performance was hailed in extravagant terms by critics across the board, as well as by the near 20,000 fans lucky enough to get their hands on one of the precious tickets.

Among those fans were Jeff Beck, Jeremy Clarkson, Liam and Noel Gallagher, Dave Grohl and Sir Paul McCartney, all attending what became one of the A-List events of the year.

Led Zep included many of their most famous songs in the show, including Black Dog, Dazed and Confused and Whole Lotta Love. The concert was held as a tribute to the late Atlantic Records founder Ahmet Ertegun, who signed the group in 1968, and after the band had finished playing Stairway to Heaven, Plant shouted: “Hey Ahmet, we did it man!”