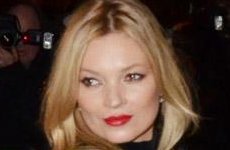 KATE MOSS might have graced all the leading fashion show runways in the world, but the south London supermodel has been snubbed from inclusion on a Walk of Fame in her home town.

A short list of ten people from Croydon drawn up by civic leaders has failed to include Moss, despite her being “by far the most famous face to ever come out of Croydon,” in the words of a friend to the Daily Star.

Those who have made the cut include comedian Ronnie Corbett, 81, who has lived in Croydon for many years and actor Dave Prowse, 76, who played Darth Vader in three Star Wars films.

Local councillors are hoping to mark a new pathway being built through the town centre with three life size portraits of the most famous three people, voted for by local residents.

A spokesperson for the council said: ”We want you to vote for the three local people from the list who make you most proud of where you live.

”The chosen characters will be represented by life-size portraits around a simple bench located on a new walking and cycling route in Croydon.”

Other famous faces being considered include late actress Peggy Ashcroft, who won an Oscar for appearing in ‘A Passage To India’ in 1984 and athlete Tasha Danvers, who won a bronze medal for hurdling at the 2008 Beijing Olympics.

While Kate has not been included so far, the council said it would take her into account if she received lots of votes.