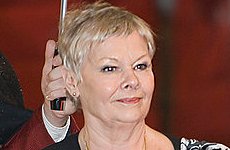 DAME JUDI DENCH is the greatest theatre actor of all time, according to readers of The Stage.

The 76-year-old beat fellow grande Dame of the boards, Maggie Smith, 75, into second place in the survey, with Mark Rylance taking third spot.

“I’m completely at a loss for words, but it’s one hell of a thing to live up to,” Dench told The Stage.

Taking the part of Ophelia in a production of Hamlet at Liverpool’s Royal Vic, Dench started her illustrious career 53 years ago and has since gone to claim numerous accolades including seven Olivier awards.

Also lauded for her film work – she won an Oscar for her portrayal of Queen Elizabeth I in Shakespeare in Love – Dench is perhaps best known to a popular audience for her clipped, school mistressy version of M, James Bond’s boss.

For its poll, The Stage asked a panel of experts to come up with a combined top ten and then readers voted for their favourites from that list.

“The order of our readers’ top 10 quite closely reflected our experts’ choices,” said Alistair Smith, The Stage’s deputy editor.