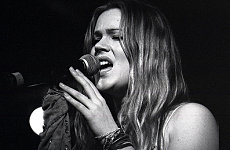 Joss Stone headbutted her half-brother after an argument at a family christening.

The Fell in Love With A Girl singer angered relatives after arriving 30 minutes late to the baptism of her godson Louis – half-brother Daniel Skillin’s son.

A guest revealed: “She was absolutely furious when Daniel confronted her and they had a full-blown argument. They were screaming at each other and, the next thing, she headbutted him.

“Other family members ran over to break it off and she stormed off. It turned from a nice family affair into a brawl between Joss and her brother. No one could believe it.”

The 21-year-old star then sparked more ill-feeling when she failed to read the order of service properly and branded elderly family members “old biddies” when they confronted her.

The source added to the Daily Mirror: “You would think as the kid’s godmother she’d be on time.

“As she recited the order of service she failed to read what she had been given. It showed a lack of respect.

“The priest had to remind her of her responsibilities as a godparent. It was embarrassing to see her mumble the wrong words.

“A couple of relatives were not happy and told her so afterwards, but Joss said she wouldn’t take abuse of a bunch of old biddies.”

Friends of the singer played down the incident, which occurred after the service when guests celebrated at recovering heroin addict Daniel’s home.

One source claimed she had just “tapped” Daniel, adding: “Joss had been looking forward to the baptism. No one seemed bothered she was a little late but a few people from Daniel’s side said something.

“At Daniel’s house she got a bit of criticism and eventually blasted them. But she didn’t want trouble and when things got heated she left. She was really upset.”