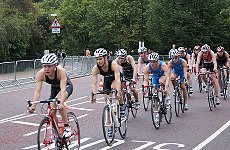 UPWARDS of 60,000 people are expected to head for Hyde Park this Saturday, 24 July, for the London leg of the World Championship triathlon series, on a course that mimics the one planned for the 2012 Olympics.

“The London race couldn’t have come at a better time because next week is two years until the Games,” said Heather Williams, British Triathlon performance director.

“An event in the heart of London is always going to be a huge. We are starting to talk about preparing for what is going to be a home Games and the biggest event that has ever been staged in the UK, especially for triathlon.”

As well as seeing some of the fittest people on earth run and cycle around one of London’s loveliest parks, spectators will also get the chance to see the triathletes swim in the Serpentine, the park’s famous lake.

For home fans, Helen Jenkins, who came third last year, is the main hope in the women’s event and world champion Alistair Brownlee is the highest ranked Brit in the men’s.

The Elite women’s race starts at 1pm; the men’s equivalent at 4pm. Entry is free.