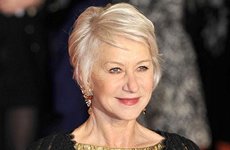 Dame Helen Mirren would ”have a glass of champagne and sit on the throne” if she was the Queen of England.

The British actress – who won an Oscar for her portrayal of Queen Elizabeth II in movie The Queen – does not ”covet” the role but would enjoy it if she was given the opportunity to be the head of state for just a day.

She said: ”I couldn’t handle the rules the queen has to live by at all and very few of us could. It’s a golden cage really. You’re never alone in that role – you are always surrounded by security. I think that’s why she loves Balmoral because she can be on her own for a while.

”If I were queen for a day, I would like breakfast in bed and then I’d sneak out incognito and go shopping in Zara.

”At the end of the day, I’d have a glass of champagne while sitting on the throne – and then I’d happily hand it all back. It’s not a role I’d covet for the long-term.”

Having met the Queen a number of times, the 66-year-old actress believes there is a ”sense of naughtiness” behind her steely exterior.

She told Woman and Home magazine: ”It’s terribly overwhelming. Your mind goes blank, but she is so lovely and so sparkly – and very adept at putting you at your ease.

”There’s a sense of naughtiness there in her eyes. But there’s also a real understanding you don’t overstep the mark with her.

”The fact that the queen stayed on course as a person is amazing. She has never got too fat, or too thin. She has stayed unbelievably consistent and followed a steady course. She’s an incredible example to us because of that.”