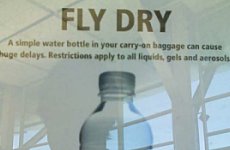 NEW TECHNOLOGY is coming to the rescue of travellers fed up with having to chuck out half the contents of their hand-baggage just to get through airport security.

Scanners have been developed that can not only tell if your hold-all contains a bottle of liquid, but that can also work out if that liquid could be used for nefarious ends.

Heathrow airport is among the early adopters of the new scanners, which, when fully up and running, should mean the government can lift its restrictions on carrying bottles and tubes containing more than 100ml of liquid.

“We continue to work to develop technological detection methods which could ease the restrictions,” confirmed a spokesperson for the Department of Transport.

It is believed the government will either lift or amend its strict liquid policy once all major UK airports are equipped with the new super-scanners.

The 100ml restrictions were originally introduced in response to intelligence that terrorists planned to take on board commonly available liquids like cosmetics that, when mixed together, provide the fuel for bombs.

7/7 ‘Could Have Been Averted’ Says Saudi King