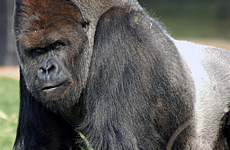 LONDON ZOO is set to welcome its millionth visitor this year – for the first time in eight years – thanks to the success of its new Gorilla Kingdom exhibit.

RECORD
The record, which is due to be achieved within a few days, proves that recent changes implemented by the ZSL have been a success with both tourists and Londoners alike. Indeed the annual attendance figure is set to beat the all-time record set back in 1991 when the Regent’s Park zoo was threatened with closure.

“The lucky (millionth) visitor and their companions will be taken around the Zoo on a personalised behind-the-scenes tour, treated to a free lunch, and given the opportunity to adopt an animal of their choice before leaving with a selection of fantastic souvenirs” says the Zoological Society London.

“Both new exhibits at the zoo, the Gorilla Kingdom and Clore Rainforest Lookout have bolstered visitor numbers – and even the miserable “summer” hasn’t been enough to stop people visiting the Zoo to come face-to-face with a gorilla, spot the world’s smallest monkeys or see sloths sloping around the rainforest canopy.”

IMPROVING
ZSL Marketing Manager, James Bailey, said: “Our rising visitor numbers are proof that ZSL London Zoo is doing things right, and we will continue improving the Zoo for both animals and visitors. We are very excited about welcoming the millionth visitor this year, it’s a real milestone for us and someone is certainly going to have an extra special day out.”

Based on current ticket sales, ZSL predicts the millionth customer is likely to visit the Zoo between the 18th and 24th of October this year.

Nutcracker Dances into the Night at the London Coliseum

Battle Plans Drawn for the War of Heathrow