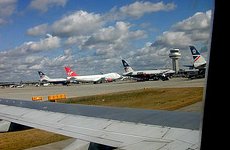 GATWICK chiefs today took the first steps towards building a second runway for the West Sussex airport, describing their planned expansion as a better bet than development at either Heathrow or Stansted, let alone the Thames Estuary option favoured by Boris Johnson.

“When compared with a third runway at Heathrow, we would have a significantly lower environmental impact whilst adding significantly more capacity,” said Gatwick CEO Stewart Wingate.

“Stansted is half empty today. We already have much better surface transport links and feel our business case will be much stronger. As for the Estuary airport concepts: there are major questions on affordability, environmental issues and whether they are deliverable.”

Wingate and his colleagues will now put together a detailed plan to be handed to the government’s Aviation Commission, which is to report on London’s airport future in 2015.

Gatwick’s expansion wouldn’t come into play until the 2020s as current agreements prevent it starting on another runway until 2019, but Heathrow expansion and Boris Island would not be built until well after that date in any case.

One of the factors in Gatwick’s favour is that it could form part of ‘Heathwick’, a joint-hub with Heathrow, given a high-speed rail link between the two that would bring transfer times down to 15-20 minutes.

There is even some talk of a three-airport mega-hub involving Luton. These options are reckoned to involve less political trouble and cost far less than either another runway at Heathrow or the Thames Estuary fantasy.