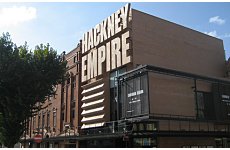 ART, music, theatre, films and food are just some of the planks of the second EAST festival, a celebration of east London’s culture, history and general all round vibrancy, which starts today and runs until 11 March

The festival kicks off at 6pm this evening in resounding fashion to the tune of church bells, with 20 of east London’s churches, from Hackney to Stratford, taking part.

Also taking part in the festival are famous east London venues such as the Barbican, the Hackney Empire and the Theatre Royal Stratford East, but, going off last year’s event, a major slice of EAST’s success is the way many smaller places put on events, to plaster a sense of celebration over a wide area.

The many performers and events on show can be found at the official site here, but one headline grabber worth a quick mention is the Martian Museum of Terrestrial Art, on at the Barbican, which aims to exhibit modern art as seen through the eyes of aliens.

Butterflies to Get Dome Home