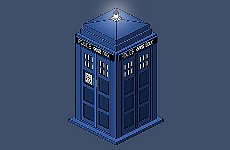 DOCTOR WHO is on his way to London, chased by some of his most infamous arch-enemies, for a new live show at Wembley Arena.

Not only is London the first stop on the good Doctor’s tour of the UK, but it is also the setting of the first scene of the show’s story, which opens in wartime London.

“This is everything I ever wanted since I was eleven: a live show, with all the coolest Doctor Who monsters, a proper story, and brand new screen material for Matt Smith’s Doctor,” said Steve Moffat, Executive Producer of Doctor Who.

“I’ll be writing scenes for it, and probably attending every single night!”

Though there will be “screen material” for Matt Smith, he and his co-actors won’t be live on stage.

As well as London, Doctor Who Live! will play around the UK, at cities including Sheffield, Cardiff, Glasgow and Liverpool, in a tour that runs from early October until early November.

The Wembley dates are 8,9 and 10 October, ticket prices start from &pound25; and they go on sale this Friday, 21 May.

Rioters Should be Watercannoned, Teargassed and Shot, Say Londoners