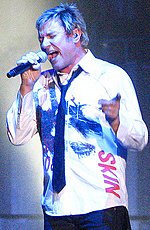 Simon Le Bon is angry about being snubbed for the Diamond Jubilee concert.

The Duran Duran frontman, 53, was ”underwhelmed” by the concert line up to celebrate 60 years of Queen Elizabeth on the throne and upset his band were not considered to perform.

Voicing his frustration on twitter during the live performances on Monday (04.06.12), he wrote: ”Well, Julian Lloyd-Webber and Gary Barlow, I have to say, I am in the least – underwhelmed (sic).

”Well, at least we have Sir Paul McCartney’s ‘willy dance’ to look forward to. He is on it, right(sic)?”

British music legends, including Sir Elton John, Annie Lennox and Sir Paul McCartney performed in front of Buckingham Palace in London to celebrate the Queen’s 60 years on the throne.

The Ordinary World singer – who looks a bit like a young Henry VIIIth these days – blames Take That frontman Gary Barlow – who unveiled his Jubilee single Sing, co-written with Andrew Lloyd Webber, at the event – for the snub.

Le Bon added: ”I absolutely wish that DD’d (Duran Duran had) been part of the Jubilee concert. But it was a Gary B booking, and he didn’t want us (sic).”

Tube Strikes over ‘Victimisation’ Set for June and July