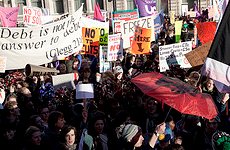 THE METROPOLITAN Police’s Counter Terrorism unit wants universities to snoop on students campaigning against tuition fee rises, it has been revealed.

“I would be grateful should you pick up any relevant information that would be helpful to all of us to anticipate possible demonstrations or occupations, please forward it onto me,” read part of an email from an unnamed Counter Terrorism officer.

The email was sent to at least 20 universities and colleges in London over the last week, reports The Guardian today.

The Met have since admitted the existence of the email.

Despite becoming a target of the counter-terrorism authorities, students plan to revive the demonstrations that late last year saw huge numbers turn up in London to put pressure on the government to stop its anti-student schemes.

First up this month, on 26 January, campaigners are to have a pop at plans to scrap the Educational Maintenance Allowance, the money less well off students get to encourage them to stay in education.

“We want people either to walk out or not to turn up for the day,” said Kieran Sutton, a student at Westminster Kingsway College.

“A lot of people depend on the EMA to even get to college or have something to eat. At 16 people should have a choice about whether to stay in college or get a job and the EMA is crucial for that.”

Then on 29 January, there’s a national demo against both the EMA cuts and fee rises, planned for Trafalgar Square, as well as a variety of occupations of education-linked buildings; the latter are the kinds of things the police want college authorities to tell them about.

“We had worried that after the government vote to increase tuition fees people may have felt the fight was over but it really feels like the opposite is the case,” said Michael Chessum, of the National Campaign Against Fees and Cuts.

“We are again hoping for tens of thousands of people and we are getting good support from unions, parents and community organisations.”