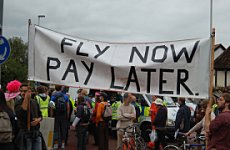 CLIMATE change activists could be stung for millions of pounds after Ryanair revealed it has plans to sue protesters.

Ryanair boss Michael O’Leary is famous for his up and at ’em approach and is currently taking legal action against Stansted airport for £2.2M losses incurred when environmental activists closed the airport last month by chaining themselves to a perimeter fence.

But the airline is set to take things further.

“At the moment our claim is against Stansted,” said a spokesperson for the Irish airline. “But we would not rule out seeking compensation from other parties at a later date.”

BAA, which runs Stansted, said they would decide on their own legal action against protesters once all the current aggravated trespass cases against the activists had finished.

Yesterday 22 of the 49 Plane Stupid members arrested for the Stansted stunt were handed sentences at Harlow magistrates’ court including £60 fines and community service.

On the plus side for Greenies, Lush cosmetics boss Mark Constantine has said he is happy to fund the Plane Stupid’s activities and provided £10,000 towards their legal costs for the Stansted case.