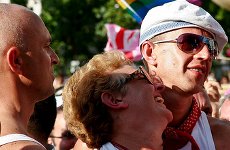 PRIDE, the UK’s biggest LGBT festival, comes to the West End this weekend, with its usual colourful afternoon parade the obvious highlight, as it heads from Portland Place to Trafalgar Square on Saturday.

Upwards of a million people are set to either take part or line the route to get a peep at the crazy costumes, floats and celebs.

This year they all go under the theme of Carnival of Love.

As well as the main stage on Trafalgar Square, various other stages will line Soho’s streets, many of which will be closed for the occasion.

London Mayor Boris Johnson might have snubbed Pride 2011, but his boss in No.10 Downing St is a huge fan.

Just a few years ago it would have seemed inconceivable that a Tory Prime Minister and Pride would go hand in hand, but David Cameron has even written a personal message on the Pride website.

“Despite the progress made there’s always more to do and every instance of homophobia or transphobia is one too many and we all need to work together to tackle it,” reads part of the PM’s letter.

“I hope you all have a fun and safe time celebrating London Pride.”

Much more info at the official Pride 2011 site.

Wicked Celebrates 2,500 Performances at the Apollo Victoria this Weekend

London Office Rents are Most Expensive in the World