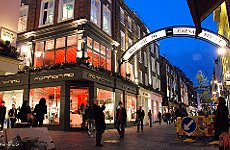 CARNABY STREET is throwing itself a 50th birthday party from this weekend, celebrating half a century since the Soho back street became the centre of the world.

The first event of the celebrations is a timeline exhibition covering the street’s centuries-long history. As you’d expect, special attention is lavished on the 60s and 70s, with the likes of Jimi Hendrix, The Rolling Stones and the Sex Pistols featured prominently in evocative photos of the glory years.

It’s the birthday do that keeps on giving, too, as there will be events going on throughout the spring and summer including live music performances and a special Carnaby Street fashion show scheduled for September.

Back in the early 60s, Carnaby Street was the site for the launch of a bright new era in fashion, closely linked to the emerging British rock and pop scene.

The then run-down street’s combination of cheap rents and expensive clothes were the bean-counting building blocks of the cultural awakening known to its friends as Swinging London.

Strictly speaking, the organisers are taking a bit of a liberty with the 50-year anniversary as the first swanky clothes shops – boutiques as they called them – started business in the late 50s, but then it’s very Carnaby Street to knock a few years off one’s age.

Carnaby Street: 1960 – 2010 runs from this Friday 26 February until early April at 38 Carnaby Street. Admission is free.

4G Phones Will Be in the Shops by Christmas, Says EE