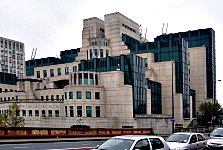 BRITAIN’S secret security forces are making renewed efforts to sign up young British Asians to the spying cause.

In an extraordinary move, MI5 and MI6 have allowed reporters from the BBC to talk to current Asian spooks at MI5 and MI6 HQs in London, in a blatant recruitment drive.

Naturally the message from the young agents is a thumpingly positive one.

“The way I feel is that my duty to God is totally compatible with my duty to my country,” said one agent.

“I just want to work as hard as I can to ensure that it’s safe for my, I’d like to say community, but by that I mean my whole country,” said another.

Courageous words, but not quite as brave as one agent who had the balls to use the old MFI gag. “My father said ‘What’s there to get excited about? You work for MFI’, and I had to remind him that I don’t work for a furniture store, I work for the security services.”

MI5 aims to add 1,000 more agents to its current 3,000 over the next four years, but is believed to be having trouble employing young Muslims.