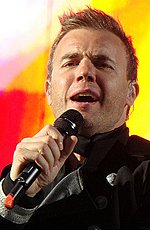 The newly-reformed band – Ronan Keating, Shane Lynch, Stephen Gately, Keith Duffy and Mikey Graham – had been placed on a strict diet and exercise regime in preparation for the tour and were excited to show off the results.

He said: “Take That raised the bar and we had to follow. We needed to out-sex them!

“We have been working out with a fitness coach for three months. We had all put on a few pounds and the directors took one look at us and said, ‘For starters, you’re all going to have to lose some weight and get in shape or we’re going to have to pull all the dance routines.’

“The fitness regime got us in such good shape we decided to strip off and show off our new look!”

Manager Louis Walsh also vowed the band are more than capable of competing with Take That.

Louis said: “I’m very proud of the guys. We’ll kick Take That out of the water. Boyzone are back and they are better than ever!”

Boyzone split up in 2000 after Ronan decided to pursue a solo career.

Last night’s show was the first of a 24-date comeback tour.

Take That reformed at the end of 2005 after nine years apart. Their subsequent tour was a sell-out and their new album ‘Beautiful World’ was one of the most successful releases in the UK in 2007.

Arsenal is the Most Expensive Place to Watch Football in the...