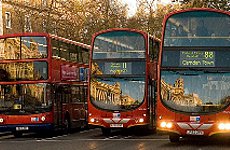 BORIS JOHNSON and the Greater London Assembly are on a collision course over Tube and bus fares, with planned rises of 7% the bone of contention.

The Mayor decides on the fare increase for the New Year in the next two months and the signs are that he is eyeing a whopping 7% hike, partly to pay for the new bike hire scheme and his plan to scrap the western segment of the Congestion Charge.

“Transport for London’s planning assumption will be that fares will rise RPI [the inflation rate] +2% each year,” admitted a TfL spokesperson.

“These are tough economic times for Londoners and in January some of the poorest were hit by big increases in bus fares,” said Labour’s John Biggs, GLA budget chair, referring to the 12.7% rise in January of this year, when Tube fares went up by 3.9%.

“Passengers should not face even higher transport costs without clear justification for them.”

Johnson isn’t duty bound to take TfL’s advice, but it looks like he will. His transport advisor, Kulveer Ranger, says the Mayor’s “drive will be to safeguard investment in rail, Tube and bus services”.

“Safeguard investment” is most probably politician code for “fare hikes”.

Combined with the Congestion Charge free pass for west London residents and the bike hire scheme, Johnson’s transport fare policies represent a sneaky transfer of cash from poor to rich.

On the average, buses are used by people on lower incomes than Tubes, while in general cyclists come from a higher income bracket still. Car-owning residents of Kensington, where the Congestion Charge might get the boot, are the luckiest in wealth terms of the lot.