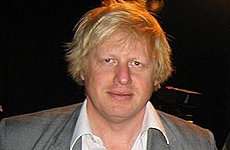 BORIS JOHNSON has hit out at political opponents who say that London is in a “mess” and told them to “raise [their] eyes and bethink of the boons of humanity”, which include, according to the London Mayor, cheap DVD players, the Chinese birth rate and playing tennis.

The London Mayor put out his ‘think positive’ message in a bizarre column for the Telegraph, in which he lists other random plus-points of the modern age including: electric bikes, Botswanan wages and the wonders of natural gas.

“This is why Boris won’t win the Mayor election,” replied one contributor to Johnson’s column.

“He is utterly out of touch with the lives of ordinary people.”

Johnson did address some down-to-earth aspects of London life in his piece.

“Crime is falling, parks are getting safer and London is going to have more police out there next year than it did three years ago,” he said.

But that “out of touch” line is likely to be pushed heavily by Johnson’s opponents in next year’s Mayoral election, especially as unemployment is at its highest in London for 17 years; house prices, except in the top bracket, are on the slide, and major delays to Tube trains have risen for five months in a row.

Will and Kate to Work from Home with Prince Harry