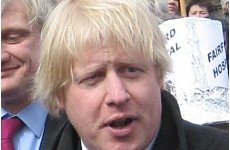 The Tory party’s man is reported to have already raised UKP150,000 for the 1 May election and one source quoted in The Independent said: “Money is no problem. [Boris] will spend about UKP500,000 before the campaign and about UKP500,000 during it.”

Details of the cash available to Johnson’s main rival – incumbent Ken Livingstone – are as yet unavailable, but it has been revealed that Livingstone will be handed the resources of the national Labour party HQ in Westminster. However, given the state of Labour ‘s finances, the likelihood is that Johnson will far outspend his opponent.

Whether money will be enough to do the trick is another question, though some indication of the answer will be gleaned this evening when Johnson, Livingstone and Liberal Democrat candidate Brian Paddick go head to head for an ITV debate.

Moderated by Konnie Huq of Blue Peter fame, the debate will be filmed as live and shown Thursday night at 11pm.

London Olympics: Athletes and Officials to be Powered by BMWs