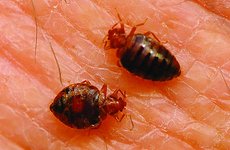 TWO SISTERS who were bitten by bed bugs over 100 times while they stayed at a London hotel have been handed £1,600 compensation.

“The bites were extremely painful,” said Melanie Carmen, who suffered 86 bites during the ordeal at the Airways hotel, Pimlico.

“We were left suffering from deep aches, itching, and other flu-like symptoms and it took months for the bites to disappear.

Melanie’s sister, Joy, was bitten at least 30 times. Both were given a course of antibiotics by Queen Mary’s Hospital, Bexley.

Airways agreed to pay the sisters £1,600 in an out of court settlement.

The pair, from Deal, Kent, are not alone in feeling the little insects’ sharp teeth – last week it was reported that admissions to hospital for bed bug bites had gone up by 19% between 2010 and 2011.

Not that the pain felt by others helped the Carmens, whose experience was one of many similar incidents at Airways.

“It makes it worse knowing it isn’t just us who have suffered because of the appalling conditions at the hotel,” said Melanie Carmen.

Madonna Fell Off a Horse and Her Marriage Fell Apart