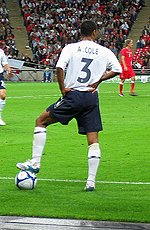 ASHLEY COLE is to face police action after it was revealed the Chelsea footballer shot an intern at point blank range.

“We will be contacting the club to establish whether any criminal offence has been committed,” confirmed a spokesperson for Surrey police.

Cole is said to have shot Tom Cowan in the torso with a .22 rifle, the most powerful gun available for purchase in Britain without a gun licence. Though an air rifle, similar weapons have been known to kill.

Reports suggest that the shooting was an accident, but police are keen to establish exactly what happened on 20 February at Chelsea’s Cobham, Surrey, training ground.

As Cowan was injured by the pellet sent into his body from five feet away, a charge of Actual Bodily Harm could be brought against Cole, but that would require Cowan to press charges.

If the 21-year-old decided to take that course, England left-back Cole could be sent down for up to five years.

Meanwhile, Chelsea are keen to draw a line under the matter.

“We have fully investigated the incident and we are taking appropriate action,” said a Blues’ spokesperson.

That “appropriate action” is thought to include a club fine of £250,000 for Cole, but some believe that Cole’s behaviour is emblematic of the shoddy management at Chelsea Football Club.

“The problem of lax discipline has been one going around the club for some time now,” a source told ESPN.

“The incident with Ashley Cole only adds to the feeling that the manager is not exercising full control over the players.”

Helen Mirren Outlines Plans for When She Becomes Queen

Piccadilly Circus to Beam Out Poetry ‘That Lights the Sun’