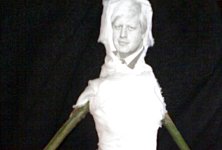 ARTIST Mark McGowan is so fed up with Boris Johnson that on Friday he is to aim an ancient curse at the London Mayor.

“I believe that there is no alternative but to put on a curse, which will hopefully get rid of him once and for all,” said McGowan, whose previous stunts include walking backwards with a turkey on his head (to highlight the problem of obesity), rolling on a pavement for four miles (to highlight impoliteness towards cleaners) and pushing a peanut seven miles to Downing Street (to highlight the cuts in students’ finances, including his own).

The curse McGowan plans to use is one gleaned off someone he refers to as “an old Japanese woman” and it involves all sorts of witchy-type things like bats’ blood, spiders and the obligatory effigy. Not surprisingly, London’s favourite mad-artist has issued a kind of don’t-try-this-at-home warning.

“This is an extremely dangerous procedure,” says McGowan. “Cursing somebody is not to be treated lightly and I have been told that any curse will come back to the person threefold, but I am willing to take the risk.

“Boris Johnson needs to be sorted out no matter what. He’s a terrible man and how Londoners voted for him I will never know.“

McGowan’s curse will take place at the south side of Tower Bridge at 12 noon, on Friday, 12 June.