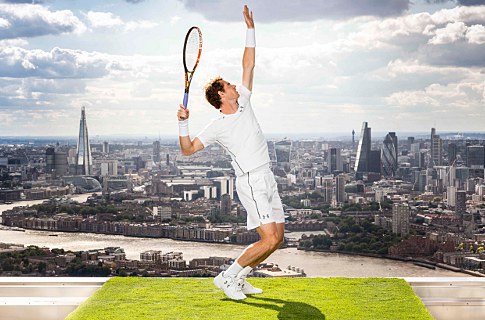 Fresh from winning on grass at Queen’s Club, Andy Murray is heading to Wimbledon to aim for a second All England championship next week.

This week he was the centre of a twitter furore when his mother Judy Murray tweeted he was her ‘special one’, in reference to a photo featuring her son and Chelsea manager Jose Mourinho. Andy’s brother Jamie took exception to this preference and thus unfolded a series of tweets between the Murray trio.

Separately in a publicity push, the Scot’s sponsor Under Armour took the British tennis champion to new heights this week as he prepares for his battles on the centre court at Wimbledon. Murray, who began his partnership with Under Armour in December 2014, debuted his custom Wimbledon kit and new UA ClutchFit Pursuit footwear in an exclusive photoshoot on the top of one of London’s tallest buildings; One Canada Square – that’s Canary Wharf Tower to most of us – overlooking the iconic London skyline.

Murray said, “I have had some great wins this year. I’ve trained hard and as a result, I’m playing some of my best tennis. I’ve worked closely with Under Armour on my kit and new footwear so I’m heading into Wimbledon feeling prepared and with a lot of confidence.“

Photo caption – Canary Wharf, London: UNDER ARMOUR POWERS ANDY MURRAY TO THE NEXT LEVEL FOR WIMBLEDON.