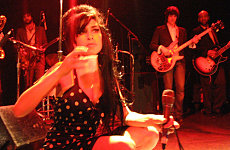 Amy Winehouse was rushed to hospital last night (28.07.08) after collapsing from a suspected drug overdose.

Paramedics spent 40 minutes at her London home after she suffered convulsions, while police were also in attendance to clear waiting paparazzi.

Amy was then carried out on a stretcher, covered with a blanket and wearing an oxygen mask.

Her father Mitch accompanied her and tried to play down the incident, claiming: “She’s fine, she just mixed up her medication.”

However, a medical source said: “An ambulance was called to a priority call involving a drugs overdose.”

Danny Saunders, a fan outside the singer’s home, is quoted as saying: “Amy was surrounded by police and wheeled to an ambulance.

“One of my friends said to Amy’s father, ‘Will she be all right?’ He said, ‘Yes, she’ll be fine’ but he looked upset.

Mitch later visited Amy at London’s University College Hospital. Asked how she was, the former taxi driver held up two bags of food and said: “This is how serious it is — I’m bringing her some Kentucky Fried Chicken.”

Amy’s spokesman Chris Goodman also claimed the collapse was as a result of medication problems.

He said: “She suffered a reaction to medication at home this evening and was taken to hospital this evening. Doctors have advised she will be kept under observation over night and is likely to be released on Tuesday.”

A spokeswoman for the hospital said the 24-year-old was “bearing up well”.

The Rehab star was hospitalised last month with lung problems after collapsing at home.