MENUMENU
Home London News All the Globe’s a Stage Again 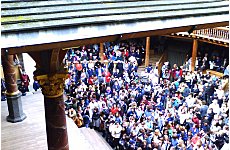 THE SHAKESPEARE’S Globe season is one of the highlights of the London summer and tickets have just gone on sale for this year’s shows, which include King Lear and A Midsummer Night’s Dream.

Lear is the first up, with public performances starting 2 May. David Calder, famous as the star of TV series Bramwell, takes the role of the tragic King. A Midsummer Night’s Dream follows from 21 May. Next comes The Merry Wives of Windsor (starting 18 June) and then Timon of Athens (6 August).

Such is the success of the Globe among tourists and Londoners that money made over the 11 years of its existence has been ploughed back into an upgrade for some of the theatre’s facilities.

“The theatre is the economic engine, and we are now entering a new phase where we can celebrate the Globe being here,” said Dominic Dromgoole, the Globe’s artistic director.

Shakespeare plays performed in the style of the playwright’s era are the Globe’s staple product, but the south bank theatre also showcases new material. This season, the new plays are The Frontline, described as a “wild and panoramic look at London on a Saturday night” and Liberty, set in the French Revolution.