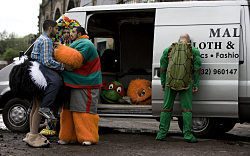 WITH THE TENTH anniversary of the 9/11 terrorist attacks on the USA just two days away, pollsters YouGov have released details of a poll reflecting changes in British attitudes to 9/11, international security and Islam.

Perhaps surprisingly, more British people remember where they were when the hijacked aircraft attacked the Twin Towers and the Pentagon than the 7th of July bombings in London in 2005. On a positive note, the number of people believing we are ‘winning the war on terror’ has almost doubled from 7% to 13%, with the death of Osama bin Laden thought to be a factor in the increased sense of safety.

Finally and most re-assuring of all, is the conclusion that the respondents overwhelmingly think that the vast majority of British Muslims are peaceful and law-abiding.

YouGov: 9/11: What the British public thinks ten years on

“Ten years on from the 9/11 attacks on the World Trade Centre, the vast majority of British adults remember where they were when the planes hit, and most think the attacks changed the world, our anniversary poll has found.

In a same way that older generations say they remember where they were when they heard that US President Kennedy was assassinated, 91% of British adults say they can remember what they were doing when news of the 9/11 attacks broke. 53% of people say that the 9/11 attacks changed the world completely, 38% think it changed the world a little. Only 7% of people think the attacks did not change much or anything.

In comparison, 84% of people remember where they were when Princess Diana died, 68% when the 7/7 attacks on the London Underground took place, 25% when Margaret Thatcher resigned as Prime Minister, 22% when Nelson Mandela was released from prison and 29% when the Berlin Wall fell (the oldest event we asked about).

The War on Terror?
Before the fifth anniversary of the attacks in September 2006, YouGov asked people if they thought there really was a “war on terror” and, if so, whether Britain and the USA were winning. While the phrase “war on terror” has fallen out of use ‒ a relic of the George W Bush years ‒ compared to five years ago, people are more likely to think there is a war (69% think there is, compared to 63% five years ago) and slightly more optimistic about whether the West is prevailing ‒ perhaps because of the death of Osama bin Laden, or the absence of recent major Islamic terrorist attacks on targets in the West.

Terrorism and Islam
People’s views on how much terrorism might affect them remain unchanged, however. 7% of people think there is a very or fairly high chance of them, a friend or relative being caught in a terrorist attack (compared to 8% in 2006), 60% think there is a low chance (compared to 59% in 2006) and 25% think the chance of being the victim of a terrorist attack is almost non-existent (unchanged).

Neither have attitudes towards British Muslims and Islam itself softened much over the last five years. While respondents overwhelmingly think that the ‘great majority’ (63%) or ‘practically all’ (17%) British Muslims are peaceful and law-abiding, a significant minority of respondents (15%) said they though a large proportion of British Muslims would be prepared to condone acts of terrorism, down from 18% five years ago. The religion of Islam itself is still seen as a threat to western Liberal democracy by 51% of British people, barely down from 53% in 2006. 37% think Islam poses little or no threat to the West.”