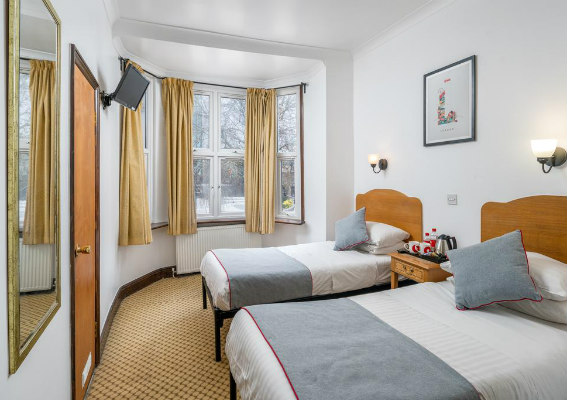 If you’re coming to the capital for a shopping spree, you’ll love the location of this West Central London hotel as its a stone’s throw from the popular Westfield Shopping Centre. Shepherds Bush Tube Station and Shepherds Bush Empire are also close by. All of the rooms have a private power shower, telephone and colour TV.

Located in the trendy West London area of Shepherds Bush, Abbey Hotel London is a great option for your trip to the UK. During your stay here you’ll be able to try out the many local bars and restaurants in the area, as well as being able to catch a music concert at Shepherds Bush Empire or Hammersmith Apollo. You’ll also be within a short walk of Shepherd Bush Tube Station, which provides access into the heart of Central London and to places such as Leicester Square and Covent Garden.

Abbey Hotel London is a friendly, family run London hotel providing money saving accommodation with a range of convenient facilities. In your room you’ll have a colour TV, alarm clock and a telephone to chat to friends, as well as having the luxury of having your own private power shower. The hotel also has a number of other facilities, including parking (available on request), internet access, luggage store and a concierge service. Book this money saving London hotel today!

Abbey Hotel London is located in West London, close to a number of local attractions and transport links. If you love shopping, you’ll love nearby Westfield London, Europe’s largest shopping centre. BBC TV Centre is also close by and there is plenty to do in the evenings as well. You could head for the bars and restaurants, as well as checking out what’s on at the Hammersmith Apollo and Shepherds Bush Empire. For travel around the rest of London you can stroll to Shepherds Bush Tube Station.

By Tube: Shepherds Bush Tube Station is within walking distance of Abbey Hotel London. The area is served by London Overground trains and the Central Line.
On Foot: Come out Shepherds Bush Tube Station onto Uxbridge Road, turn to your right and start walking. You will soon come to Wood Lane on your right, where Abbey Hotel London is situated at number 23.