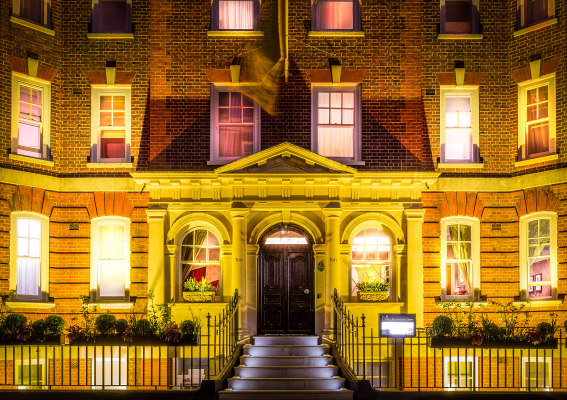 10 Manchester Street Hotel is located in a prime location, just a short stroll away from the many shops on Oxford Street and only a five minute walk from Baker Street, home of Madame Tussaud’s and the London Planetarium. This attractive red brick property, built in 1919, provides you with high quality accommodation and has a 4 Diamond rating. 10 Manchester Street Hotel is also well placed for public transport, with five different underground lines within a few minutes walk.

10 Manchester Street has 37 guest rooms, all with satellite television, direct-dial telephone, mini refrigerator, trouser press and tea and coffee making facilities. A continental breakfast is available each morning at 10 Manchester Street Hotel. At the end of a tiring day in the capital, the lift to every floor will save your aching feet as you return to the comfort of this outstanding hotel.

10 Manchester Street Hotel has a range of attractions close by, including Madame Tussaud’s and the London Planetarium. The city is vibrant, with plenty of drama in Theatreland, so be sure to see a musical while you’re in town. If you prefer a leisurely day, The Wallace Collection has a great display of 18th century French furniture.