A Christmas Gift From Bob (PG) 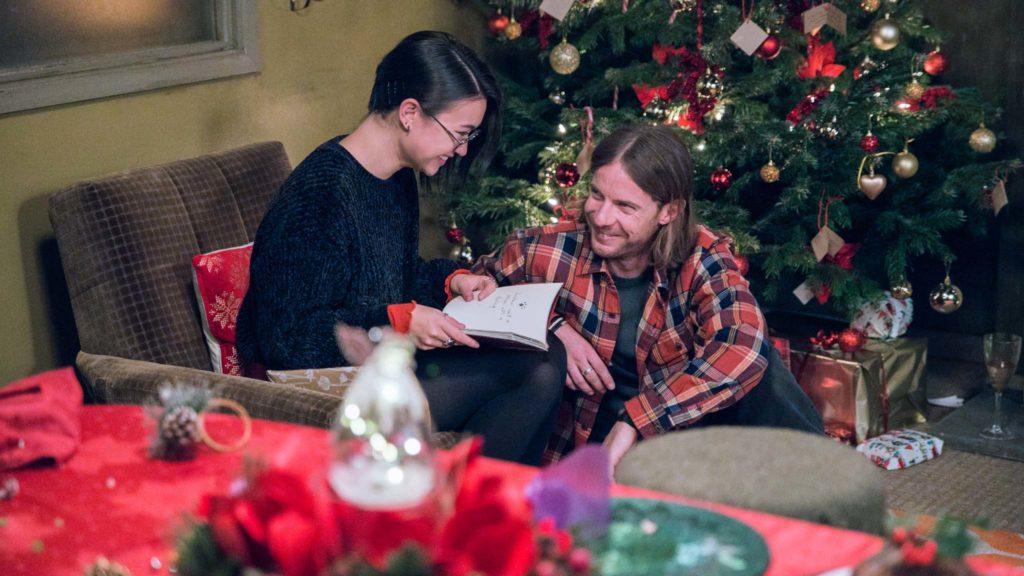 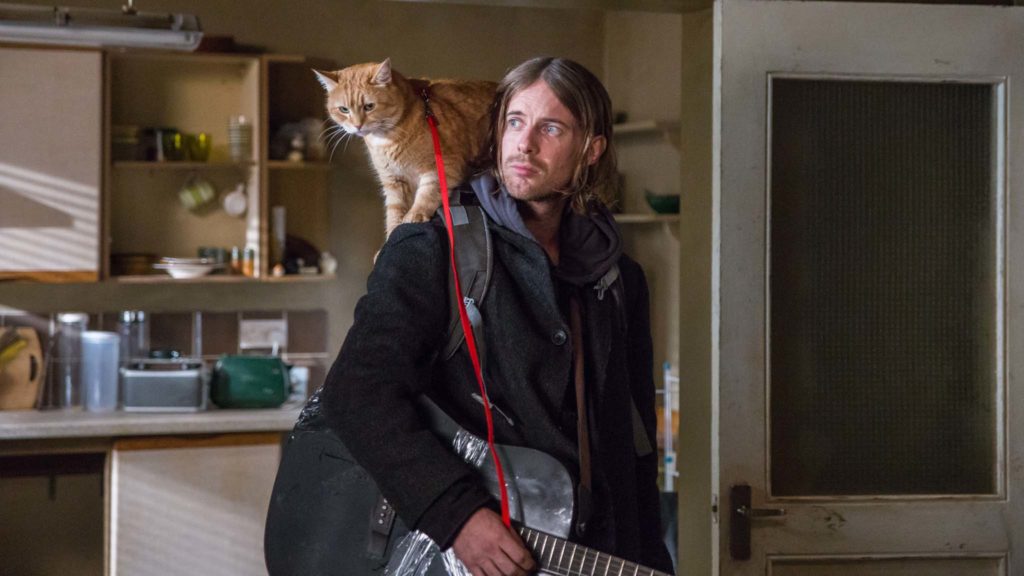 Review: Dedicated to the memory of the eponymous ginger feline, A Christmas Gift From Bob is a life-affirming drama of small and simple pleasures, which celebrates the profound bond between a pet and its human protector. Charles Martin Smith’s sequel to the 2016 drama A Street Cat Named Bob claws the great tradition of festive films that have one eye on the turkey, trimmings and tinsel and the other on tears and tantrums. Heartstrings are plucked merrily by screenwriter Garry Jenkins, who plunders James Bowen’s memoir A Gift From Bob for his narrative framework and garnishes with all the cinematic trimmings: rosy-cheeked carol singers spreading festive cheer, (fake) snow falling on cue and a poignant, handmade present nestled beneath a tree.

All that sugar – and there is plenty – is offset by the bitterness of personal loss (a father memorialising his terminally-ill child at Christmas) and boo-hiss pantomime villainy courtesy of an animal welfare officer, who is determined to separate the four-legged hero from his owner. Elements of the script are malnourished – some supporting characters serve the plot while the reconciliation of one fractured family is rushed and delivers a glancing emotional blow rather than a mighty wallop.

A Christmas Gift From Bob picks up shortly after the first film. James Bowen (Luke Treadaway) attends his publisher’s Christmas party with Bob the Cat (playing himself) perched on his shoulder. His first book is a success and an editor excitedly reminds him that a follow-up is due by early summer. “I’m sure you’ll get an idea soon. They often happen when you least expect it,” smiles Dame Jacqueline Wilson (playing herself), who meets James by the cloakroom as they sneak out early from the festivities. A chance encounter with a homeless man on the streets of London provides James with the creative spark.

In flashback (captioned A Christmas Past) he recalls a bitterly cold winter when the money he earns from busking on the cobbles of Covent Garden barely covers the cost of heating and food for Bob. Charity worker Bea (Kristina Tonteri-Young) and local shop owner Moody (Phaldut Sharma) support James as he wrestles with self-doubt following an unsettling run-in with animal welfare officers Ruth (Pepter Lunkuse) and Leon (Tim Plester).

A Christmas Gift From Bob lacks the emotional grit of the original film – James’s hard-fought battle with heroin addiction – but there are still plenty of reasons to sob. Treadaway is quietly affecting as a survivor, who is blissfully unaware of his positive impact on others much like James Stewart’s suicidal family man in It’s A Wonderful Life. Smith’s sequel doesn’t scale the dizzying heights of Frank Capra’s 1946 festive fable but casts a similarly warm glow by trumpeting the enduring power of the human spirit in the face of adversity.

Find A Christmas Gift From Bob in the cinemas

Words On Bathroom Walls (12A) 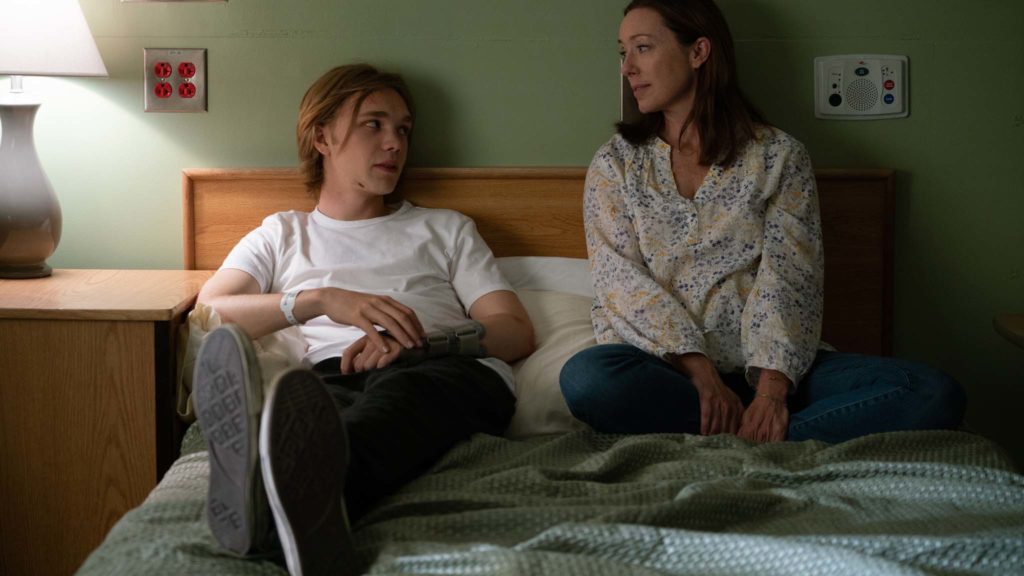 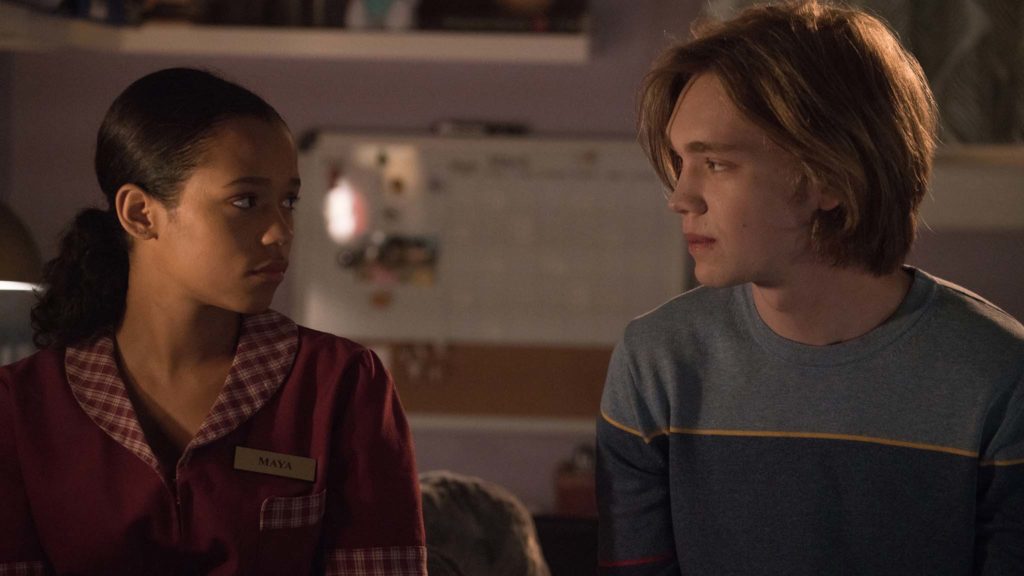 Review: Based on the young adult novel by Julia Walton, Words On Bathroom Walls follows a well-thumbed playbook of coming-of-age stories but sets itself apart from the hormone-addled crowd by delving into the troubled mind of its teenage protagonist. In a year when mental health has been elevated in the public consciousness, director Thor Freudenthal’s moving drama is a timely call to arms for compassion and understanding for those who are suffering in isolation. Screenwriter Nick Naveda addresses the lead character’s schizophrenia with sensitivity and wry humour, employing visual cues as a cinematic shorthand for a complex and potentially frightening condition.

His script repeatedly references the cultural landscape: an enterprising student who sells essays to struggling classmates is pithily described as the “Bernie Madoff of academic fraud”, while the lead character sarcastically anticipates an emotional outpouring with his psychiatrist when he quips “I was looking forward to our Good Will Hunting moment”. Actor Charlie Plummer deftly navigates the inner turmoil and mood swings of his alienated 17-year-old. His sympathetic, finely calibrated performance is matched by the luminous Taylor Russell as a spunky classmate, who understands the delicate art of concealing deep-rooted pain.

Witty, introspective high school student Adam Petrizelli (Plummer) is diagnosed with schizophrenia, which manifests as a pervasive, spider-like darkness that leeches into his waking visions. Voices in his head take the form of three distinct, competing personalities: hippy chic free spirit Rebecca (AnnaSophia Robb), sex-obsessed teen Joaquin (Devon Bostick) and baseball bat-wielding thug The Bodyguard (Lobo Sebastian). A psychotic break in chemistry class leads to expulsion from school and Adam transfers midway through his senior year to Saint Agatha’s Catholic academy so he can graduate and pursue his dream of attending culinary school.

Sister Catherine (Beth Grant) agrees to admit Adam on condition that he achieves a solid grade point average, scores above 90% on the end-of-term benchmark examination and continues to takes part in the trial of a new drug, Tozaprex. The youngster relies heavily on his doting mother Beth (Molly Parker) for encouragement. Running battles with a new stepfather, Paul (Walton Goggins), who insists on hiding all the knives in the house, are unsettling. Meanwhile, at the academy, sassy valedictorian Maya (Russell) catches Adam’s eye but he is reluctant to share the truth about his mental health.

Words On Bathroom Walls strikes a pleasing balance between honouring and subverting genre conventions. At least one cathartic speech doesn’t elicit the response we expect. Plummer and Russell are appealing foils and they catalyse simmering chemistry that elevates their on-screen romance. Growing up isn’t child’s play and Freudenthal’s picture confidently captures the messiness and uncertainty of those wonder years.

Find Words On Bathroom Walls in the cinemas