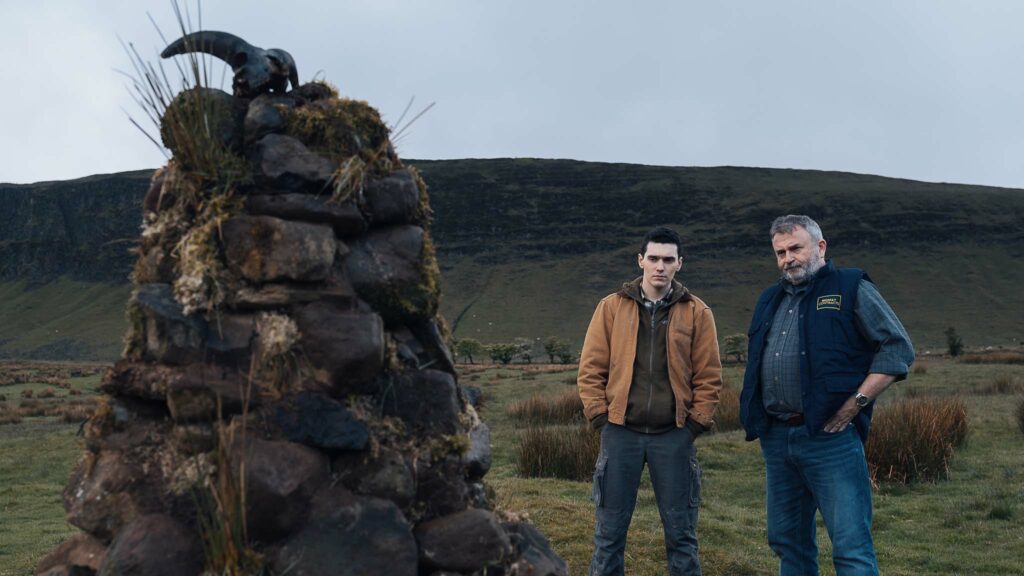 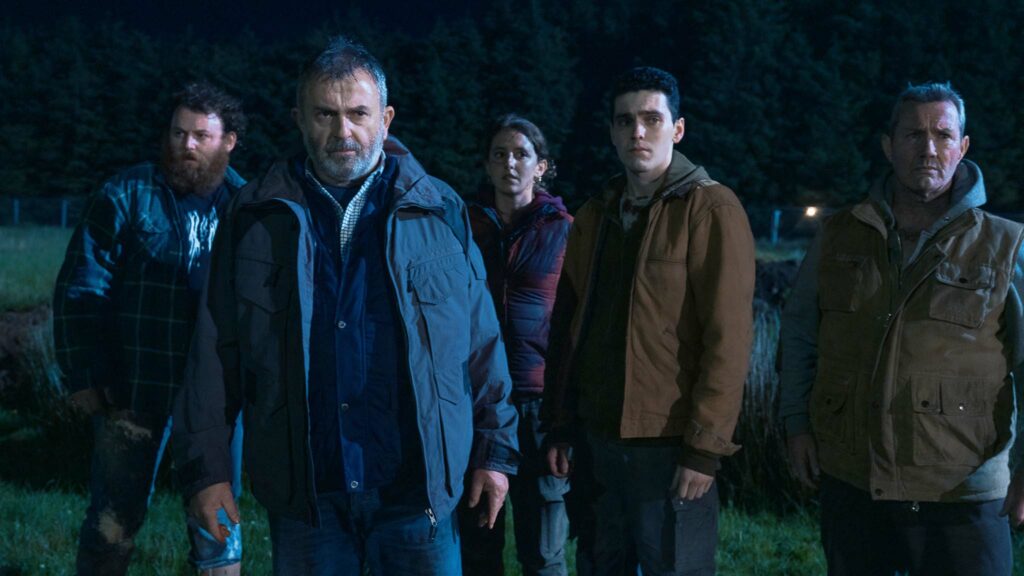 Review: During an atmospheric prelude to carnage in writer-director Chris Baugh’s vampire horror comedy, an elderly couple (Stella McCusker, Lalor Roddy) enjoys a leisurely night-time cup of tea. A singlet droplet of blood from one nostril becomes a trickle and then uncontrollable torrents from every orifice, attracted to some unearthly visitor at the front door. Exsanguination is a fitting metaphor for Boys From County Hell, a gleefully violent craic that drains more energy from us in 89 minutes than it replenishes with bone-dry humour or grisly make-up effects.

Baugh’s script has some appealingly droll moments. When the local undertaker struggles to make sense of the mounting devastation over a hot brew, his nervousness as narrator (“I’m not sure where to start…”) is met with delightful indifference by one hungry neighbour. “Maybe with a biscuit or two?” The fractious father-son dynamic brought to life by Nigel O’Neill and Jack Rowan does not deliver the emotional pay-off we expect although one man’s noble sacrifice for the greater good is certainly novel. Affirming Irish stereotypes, alcohol flows almost as freely on screen as blood before the thinly sketched characters rally under a cover of darkness to meet gnarled, ancient evil head-on. The bare bones of an entertaining and irreverent romp are clearly visible, it is just the flesh and muscle that are missing.

Eugene Moffat (Rowan) lives in the sleepy Irish town of Six Mile Hill in a tumbledown farmhouse, which has been in his late mother’s family for generations. Tourists flock to the close-knit community to visit a moss-encrusted burial cairn, rumoured to mark the spot where vampire Abhartach was laid to rest. According to legend, Abhartach’s reign of terror inspired Dublin-born author Bram Stoker to pen Dracula at the tail end of the 19th century. The local pub is named in the writer’s honour.

Boys From County Hell changes some long-established rules of the vampire genre (stakes through the heart, sunlight) but doesn’t replace them with anything startlingly original. Genuine scares are non-existent but special effects ladle on the sticky claret with gusto. Performances are solid despite a paucity of dramatic meat for actors to sink their fangs into.

Find Boys From County Hell in the cinemas

The Last letter From Your Lover (12A) 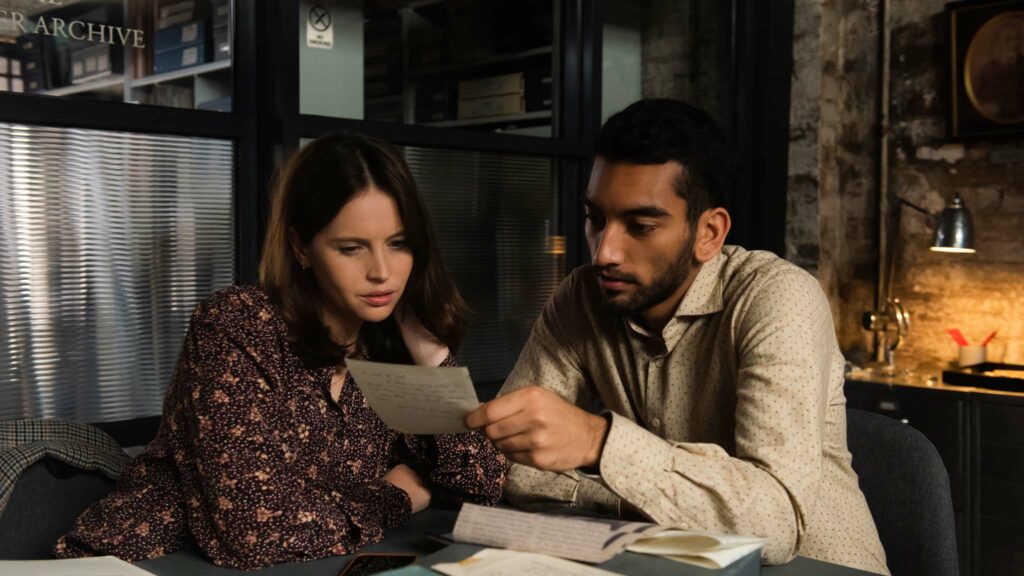 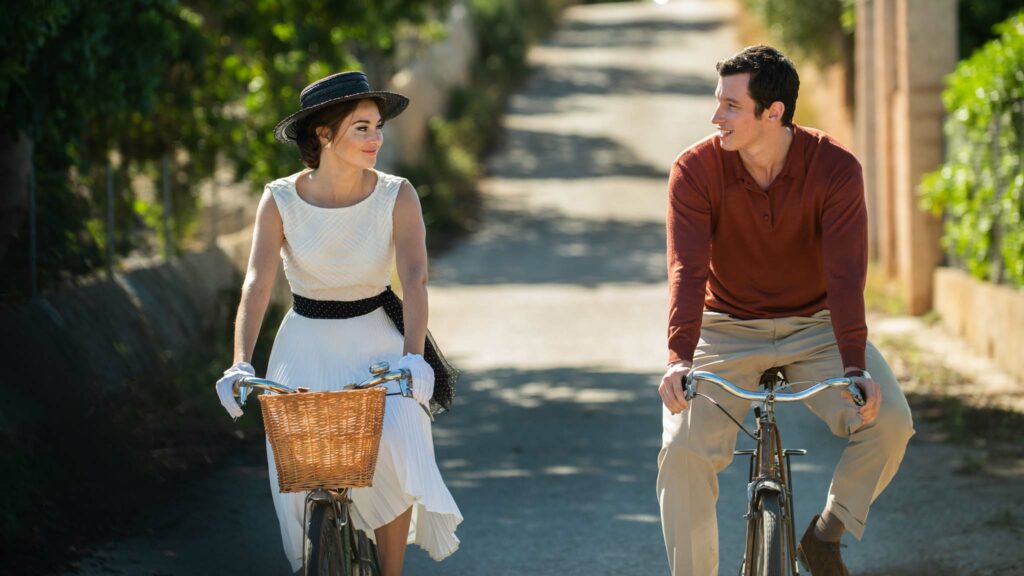 Review: Raging fire, protruding tongue, smiling face with horns – the inelegant art of seduction in the 21st-century has been reduced to rows of suggestive emojis on smudged touchscreens. It’s a far cry from the quickening pulses of a not-so-bygone era when couples courted on ink-stained paper and disgorged feelings in beautifully composed love letters that spoke directly from the heart, not the groin.

Jojo Moyes’ bestselling novel The Last Letter From Your Lover tantalised readers with a forbidden affair, chronicled in a series of handwritten missives simply signed “B”. Screenwriters Nick Payne and Esta Spalding retain the source text’s timeframes, skipping back and forth between stolen glances in rose-tinted swinging mid-1960s London and walks of shame more than 50 years later in the cold, pristine capital. Director Augustine Frizzell captures contrasting moods and textures of the two periods.

The past is softly lit and impeccably dressed in pillbox hats and matching gloves and scarves, while the present has a soulless, rain-sodden, metallic quality that reflects our reliance on technology to facilitate interactions. Strangely, it’s the 21st-century framing device starring Felicity Jones and Nabhaan Rizwan which is far more involving than swooning flashbacks to Callum Turner’s pursuit of Shailene Woodley. Their screen chemistry is at best lukewarm and I felt no emotional tug as the scriptwriters contrived a sappy resolution involving older incarnations of the doomed lovers, played by Ben Cross and Diana Kent.

In present day London, commitment-phobic journalist Ellie Haworth (Jones) stumbles upon a misplaced love letter in the archives of her newspaper, The London Chronicle. She becomes fixated on a secret affair detailed in the correspondence and enlists the help of archivist Rory (Rizwan) to piece together the forbidden desire. “I have to know how it ends,” Ellie implores Rory. Through their dogged and haphazard detective work, Ellie unravels the fate of society wife Jennifer Stirling (Woodley) and her powerful industrialist husband Laurence (Joe Alwyn) in 1965 London.

A chance encounter with debonair foreign correspondent Anthony O’Hare (Turner), who is writing a profile on Laurence, turns Jennifer’s world upside down. She surfs a crashing wave of emotion and contemplates leaving Laurence and the financial security of her marriage for unbridled passion with a new man. However, fate has other ideas and it’s left to Ellie and sidekick Rory to repair the damage.

The Last Letter From Your Lover cribs a few footnotes from The Notebook but lacks that film’s swooning, giddy outpourings across the class divide. Jones and Rizwan’s appealing and lightly comical double act polishes the rougher edges of the plot’s many contrivances. Frizzell’s film is lavishly tailored and accessorised but beneath all the luxurious fabrics is a heart only half full of missed opportunities and regrets.

Find The Last letter From Your Lover in the cinemas 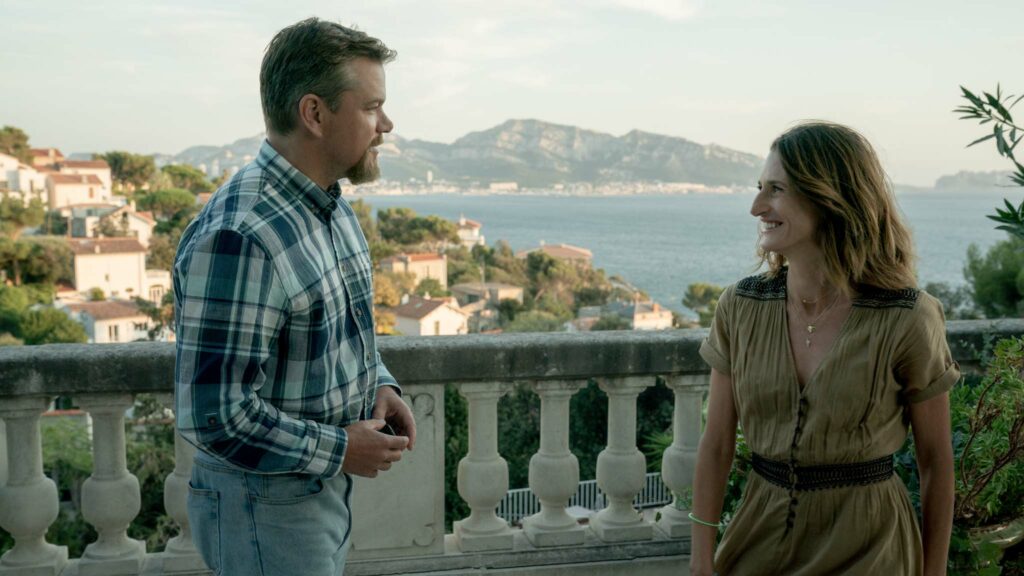 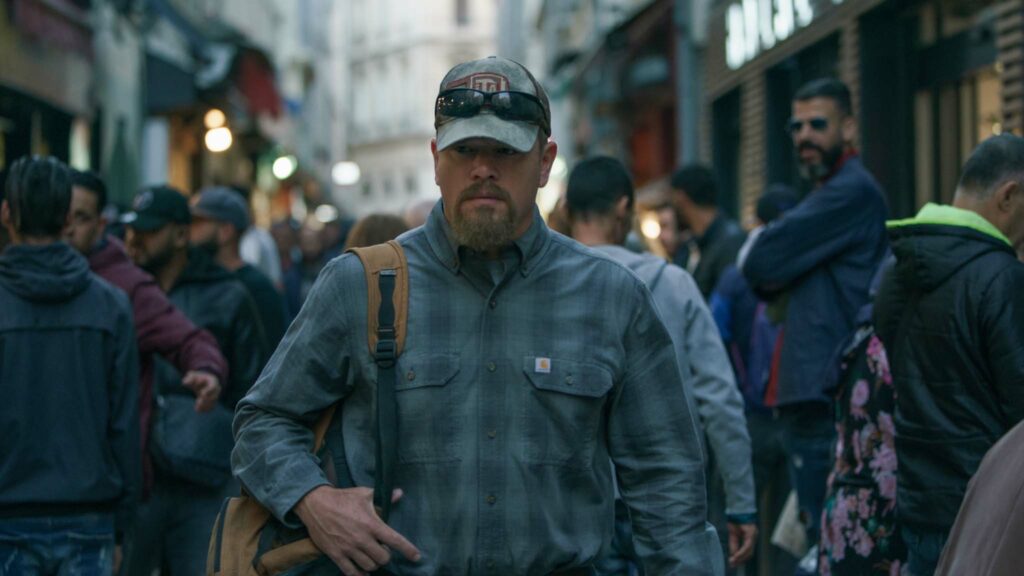 Review: Life is brutal. Those words are repeated in Tom McCarthy’s slow-burning thriller, inspired by the case of American student Amanda Knox, who was eventually exonerated of killing her British roommate Meredith Kercher in Italy. Co-written by McCarthy, Marcus Hinchey, Thomas Bidegain and Noe Debre, Stillwater trades Perugia in central Italy for the busy French port of Marseilles and reconfigures years of legal to-and-fro as a bruising one-man crusade anchored by Matt Damon as the accused’s father.

The spectre of Donald Trump looms large and the script addresses political ire in an early scene when a French character directly asks Damon’s patriarch if he voted Republican in the presidential election. There is visible relief when he says he didn’t. “I got arrested. They don’t let you vote when that happens,” he casually explains.

Western ideals repeatedly clash in McCarthy’s picture and the tug-of-war between four international screenwriters mines humour from the cultural divide, like when a French mother observes an American guest saying grace over a homemade hamburger and quips, “When I see what you guys eat, I understand why you pray”. Damon delivers a solid lead performance opposite co-star Camille Cottin, trading heavily on his nice-guy screen persona to milk occasional droplets of sympathy for his gruff and exasperating roughneck. He carries the film through the longueurs of an unwieldly 139-minute running time.

Construction worker Bill Baker (Damon) travels from Oklahoma to Marseilles where his daughter Allison (Abigail Breslin) is five years into a nine-year sentence for killing her partner Lina Hamdi. Allison has always asserted her innocence but the French media demonised her in the run-up to the trial. During his latest visit, Allison passes Tom a note intended for her lawyer Leparq (Anne Le Ny), which raises the tantalising possibility that a young man named Akim (Idir Azougli) is responsible for Lina’s murder.

The lawyer refuses to act on hearsay (“The last thing you want to give your daughter is false hope”) so Bill recklessly takes matters into his own hands. To overcome the language barrier, he enlists the services of actress Virginie (Cottin) as a translator and befriends her cherubic eight-year-old daughter, Maya (Lilou Siauvaud).

Stillwater is torn between immersing us in a fascinating character study of a charmless American abroad and delivering conventional narrative beats replete with loose threads tied into a neat bow by the end credits. Differing attitudes to matters of race are exemplified when Virginie explains that it isn’t safe to search for Akim on an overcrowded housing estate. “Because we’re white?” interjects Bill. “Because we’re not from there,” she responds, bristling with indignation. His crude stumbles through a minefield of political correctness set the characters apart and are ultimately the most fascinating facet of McCarthy’s quest for justice.

Find Stillwater in the cinemas 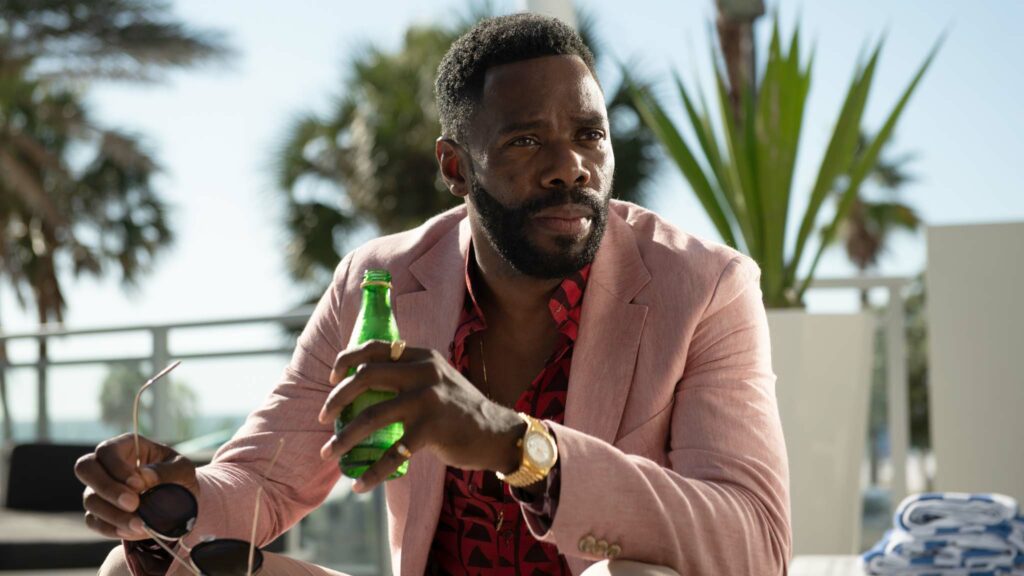 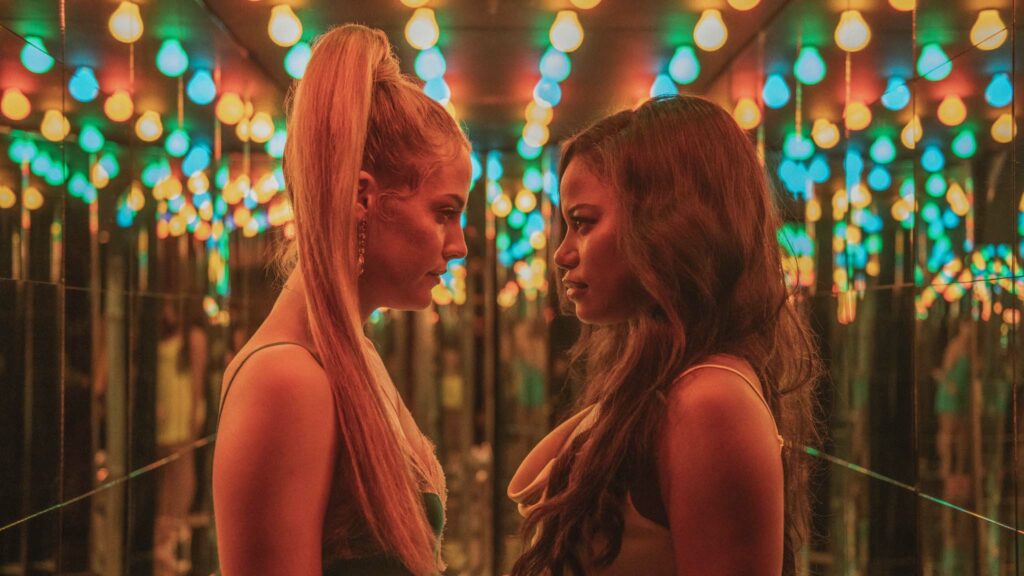 Review: Truth is crazier and more entertaining than fiction in Janicza Bravo’s blackly humorous road trip, based on a series of more than 140 tweets posted in October 2015 by waitress Aziah “Zola” King about an ill-fated excursion to Florida to earn money as a stripper. Her social media storm went viral and spawned an article in Rolling Stone magazine, which confirmed King may have embellished some of the more lurid aspects of her tale.

Bravo’s film opens with a simple admission – “Most of what follows is true” – and proceeds to use Zola’s profanity-strewn outbursts, sometimes word for word, as a hilarious framework for a freewheeling story of soured sisterly solidarity, prostitution and ham-fisted criminal enterprise. “It’s kinda long but it’s full of suspense,” promises Zola (Taylour Paige) in her omnipresent voiceover that runs like a river of filth through every twist and turn. Flashes of sexual menace and full-frontal male nudity cast us as voyeurs to the escalating threat and delirium.

Paige’s grounded performance is countered by an all-guns-blazing turn from Riley Keough as the manipulative minx, who somehow retains a thin veneer of likeability despite every lie and betrayal. They are a dynamic pairing, feeding off the whirling energy of Bravo’s camerawork that repeatedly laces moments of exuberance (the road trippers singing together in the car) with discomfiting reality (a Confederate flag fluttering in the breeze to signal their arrival in Florida).

Detroit waitress Zola (Paige) is enduring a long day at work when she serves another stripper, Stefani (Keough), and sparks an instant connection. The following day, Stefani invites Zola to join her on a trip to Tampa to perform at a club where one girl reportedly made “5 Gs a night”. Zola ignores the protestations of her boyfriend Sean (Ari’el Stachel) and excitedly hits the road with her new friend and Stefani’s roommate Abegunde Olawale aka X (Colman Domingo) and boyfriend Derrek (Nicholas Braun).

After a long, troubling car journey, the women leave their bags with Derrek in a motel room while they head to the club. Tips are thin – nothing close to 5,000 dollars – and Zola’s mood is killed when one punter whispers, “You look a lot like Whoopi Goldberg!” Soon after, the threats and intimidation begin as it transpires that X is Stefani’s pimp and he “takes care” of her by posting her for sale on a website.

Zola is a wild cautionary tale, galvanised by Bravo’s kinetic direction and the unapologetic authorial voice of the real Aziah King. A symphony of trills and chirrups from characters’ mobile phones reminds us of the film’s origins. Composer Mica Levi heightens our disorientation with a woozy score that tinkles lightly back and forth between seductive and sinister, emphasising how quickly the central character’s fortunes can moulder into despair.

Find Zola in the cinemas